Support me on Patreon

The Great American Eclipse swept across the nation on August 21, 2017, and it didn’t disappoint. A 70-mile-wide region, stretching from Oregon across to South Carolina, experienced totality—the Sun’s photosphere was entirely covered by the Moon, leaving only the wispy corona visible. The corona, the outermost part of the Sun’s atmosphere, has a temperature greater than 1,000,000 K; by contrast, the surface of the Sun is only 5,800 K. Yet the reason we can’t see the corona under normal circumstances is because its density is only 10-12 times that of the Sun’s photosphere, so the Sun outshines it. Put the Moon in front of the Sun so that it covers its photosphere entirely, however, and you get this:

WHOA! You can clearly see the wispy features of the corona in this photo.

What follows is a whole lot of eclipse images, phone pics, professional photographs, videos, partial eclipse photos, photos of totality, the diamond ring, Baily’s beads, you name it! So buckle up, this is one heck of a Great American Eclipse ride!

Not everyone got to see totality, but the images are nevertheless stunning! My brother and actor Dylan Ramsey took some photos, and video! Here’s one he took in Los Angeles through solar shades:

And another, by my friend Divya Persaud:

And here are two photos taken in Texas by Logan Kane: 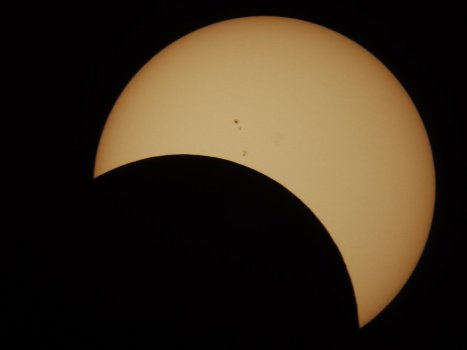 This one is particularly nice, because of the silhouette:

There were also events held around the country! One was at my school, UC Irvine, and was organized by my friends and colleagues, UCI Physics and Astronomy grad students Katy Wimberly and Arianna Brown! Here are a few photos from the event:

What great work by Katy and Arianna, the event drew in over 1000 people to watch the eclipse!!

Before we get to some totality photos (we all want those, right?!), let’s look at this cool effect that happens as an eclipse progresses and the Sun’s light shines through tree leaves:

The leaves of a tree act as pinhole projectors, and because there are so many leaves, you have solar eclipse projector-ville at your feet! Really neat.

Now, totality!! And there are plenty of magnificent ones you’re about to see. Here are a couple of videos:

The beauty of videos is that you get to hear the crowd’s excitement! Nothing better than hearing people being thrilled about astronomy.

Now, onto some photos! Here’s a nice one:

And this one was taken by my friend Kathy Kerner: 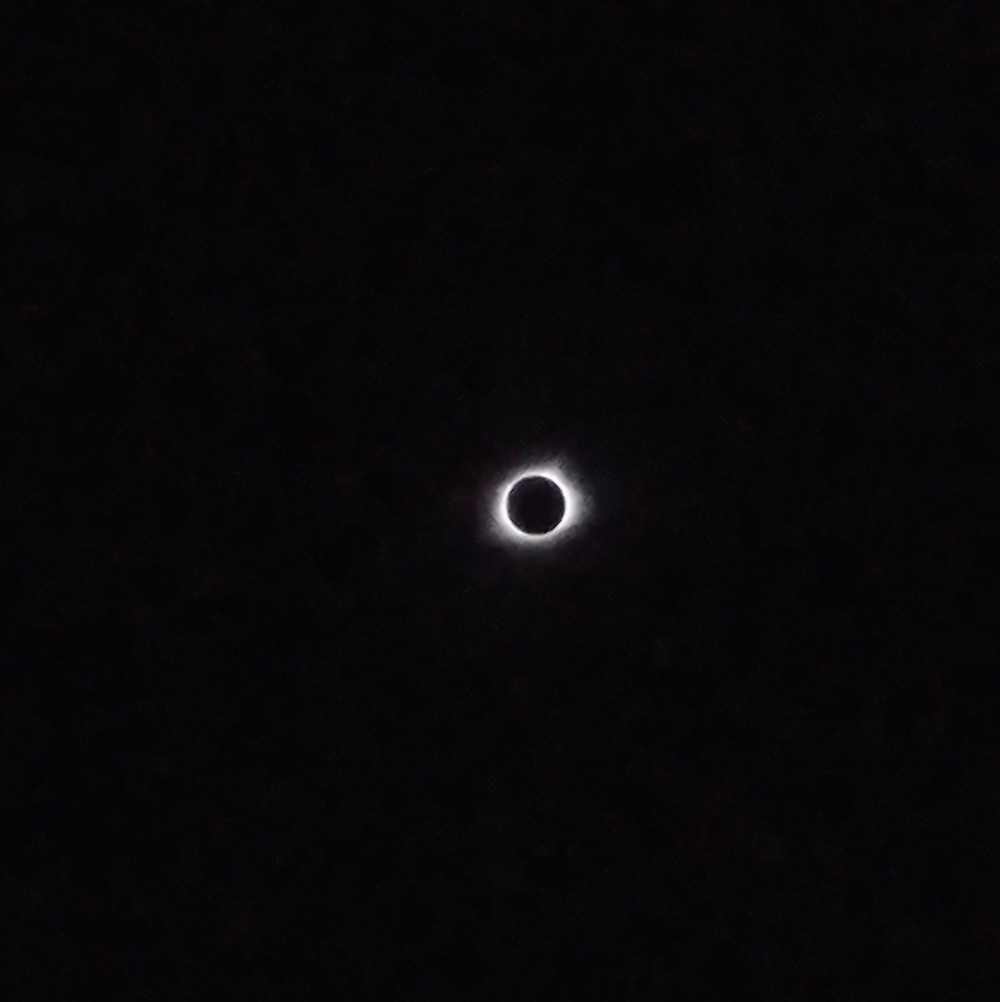 But wait for it: Kathy and her friend Nicole Kwapis got to see that spectacular diamond ring we all love so much! Here it is:

More diamond rings? But of course! Here’s another:

And another, because WOW:

But we also have Baily’s Beads! Here’s a photo of Baily’s beads almost going into a diamond ring:

And these were taken by my friend, space enthusiast, and graphic designer Jason Major (who processes some of the best space photos, by the way): 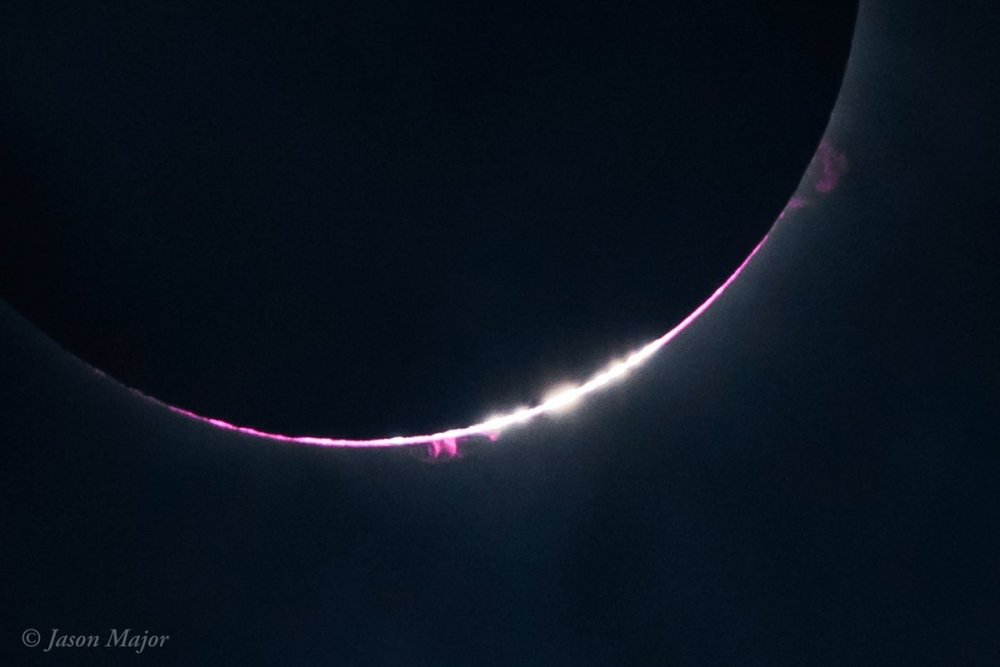 Of course we can also bask in the Sun’s corona, as we did in the first photo:

The added visibility of solar prominences in Jason’s photos are just spectacular! Here’s another photo that shows off the Sun’s corona, and also features prominences:

Bear in mind: solar prominences can get really high—several Earth diameters above the Sun’s surface! The in the above photo at 3 o’clock looks like the same one in Jason’s at 4 o’clock; performing a crude measurement, and using the fact that the Sun has a diameter of 1.39 million km, or about 865,000 miles, I estimate that prominence to be about 54,500 km, or 33,900 miles, high—that’s over four Earth diameters! Isn’t our solar system’s star wonderful?

Now, back to the eclipse. Some had cloudy skies, but that didn’t get in the way of the exquisite spectacle that was the eclipse:

And a time lapse of totality:

And, saving the best for last: my friend and planetary scientist Tanya Harrison got to experience the moment from Alaska Airlines!

No matter where you were, if you saw this eclipse, you experienced a moment that you shared with millions of people, a moment in which nothing mattered, nothing but basking in the glory of science, and chance, making it possible for us to be able to view something so spectacular from our planet. Cherish that moment—it was beautiful.

I'm a PhD candidate in cosmology at UC Irvine. I pick apart the Universe to figure out how it works and what it's made of. I enjoy communicating science with the world in my spare time. Let's explore the Universe together! View all posts by Sophia Gad-Nasr