So, what’s the rest? Well, it’s stuff, or matter. But because the Universe never fails at being fascinatingly weird, only some of this matter is stuff that we’re used to, stuff that interacts with light, like you, me, the stars, your dog, the device you’re using right now to read this. And when I say some, I mean like a really small amount: 5%. Just 5% of the Universe is normal matter. The remaining 25%? Dark matter, stuff that doesn’t interact with light at all, revealing itself only through its gravitational interactions. Theorized by Fritz Zwicky in the 30s to explain why galaxy clusters weren’t flying apart, and discovered via its gravitational interactions in galaxy rotation curves by Vera Rubin in the 70s, dark matter comprises a huge chunk of the Universe’s contents, and yet, remains a mystery.

The Solar System: Our Gravitational Lab

Because dark matter doesn’t interact with light, it makes it really hard to study. But there is something we can use to study it: its interactions with gravity. We understand gravity pretty well, and have obtained really precise measurements of it using our own little lab in space: the solar system. The Sun, being the heaviest mass in the solar system, is the main source of gravity for the planets. Because the planets are located at different distances from the Sun, the Sun’s gravitational pull is different on each, decreasing by the square of the distance—that is, it gets weaker the farther out you go, so planets farther from the Sun will experience a weaker gravitational pull, and in turn, have lower orbital velocities1 than those closer in.

1This comes from the fact that when we set the force due to gravity,

equal to the centripetal force,

, when we solve for the velocity, we get

. That means that the velocity is proportional to the inverse square roor of the distance,

, hence it decreases as we move further out from the central mass.

Now, let’s zoom out and look at a galaxy. Stars in galaxies orbit about the galactic core, much like planets orbit their host star. If you were to plot a velocity curve of the stars, from the core out to the edge of the disk, you’d expect it to look something like the velocity curve of our solar system, with velocities decreasing at further distances as ~

. The kicker: when you actually plot one, velocities tend to remain relatively constant, or sometimes, even slightly increase, with distance. When you account for all the normal matter in a galaxy, it cannot explain how velocities are constant with distance–there’s just not enough gravity from the stuff we can see.

There’s also stuff we can’t see, like black holes and brown dwarfs, and things that simply aren’t luminous enough to detect (these are called Massive Astrophysical Compact Halo Objects, or MACHOs1). Still, accounting for these along with the visible matter doesn’t explain the rotation curves! This tells us there must be stuff we can’t see contributing to the force of gravity acting on these stars way out at the edge, giving them higher velocities—dark matter. This is how Vera Rubin, along with her colleague Kent Ford, discovered the existence of dark matter in the Andromeda galaxy in the 70s. 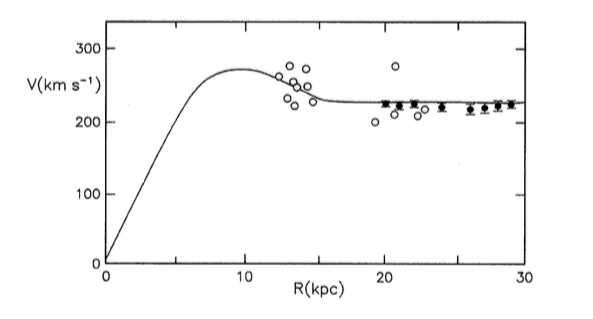 1MACHOs are a form of dark matter. However, there isn’t enough of it in the Universe to explain the anomalies we observe.

Another way we know it’s there is through a phenomenon called “gravitational lensing” which happens with giant clusters of galaxies. Gravitational lensing is an effect of Albert Einstein’s Theory of General Relativity, which says masses curve spacetime1: because clusters are massive, they bend spacetime, and bending spacetime causes the path of photons leaving objects behind the cluster to bend, too. The bent trajectory of these photons originating from the object behind the cluster creates images of the object that are warped into the form of arcs and rings around the cluster. The amount the object behind the cluster is warped, or lensed, tells us how much mass is in the cluster doing the lensing. We find that these clusters are warping the image of the object way too much for the visible matter to account for, which means there must be tons of dark matter in these systems.

Another thing that tells us dark matter is exists comes from a whisper of the Big Bang: the Cosmic Microwave Background (CMB). The CMB is a snapshot of our baby Universe, just 380,000 years old. It’s also the farthest we can see back into our Universe’s history1 because before that, the Universe was opaque—it was a subatomic particle soup! At that time, photons just kept bouncing off of other particles, so they weren’t free to travel through space like they are today. When photons finally decoupled from matter, they traveled freely through space, no longer bumping into matter, and left us a nice little photograph of a time in the Universe’s distant past.

The CMB shows us a time in the Universe’s history when the density of this soup was relatively uniform—except for little quantum mechanical fluctuations that caused the density to vary. Now, here’s the cool part: these density fluctuations caused matter to want to bunch up under gravity, but because regular matter interacts with light, photon pressure pushed the matter out and prevented it from collapsing under gravity2. But dark matter doesn’t interact with photons, so the radiation pressure didn’t affect it, and it collapsed into dense clumps. Then, photons decoupled from the soup and started traveling through the Universe freely, some from deeper gravitational potential wells than others due to the fluctuations, resulting in a slight variation in the energies the photons left the soup with. So they arrive here today at slightly different temperatures, resulting in the mottled photograph of the CMB we have. These little anisotropies allowed for dark matter to collapse and form the seeds for matter to form bigger stuff later in the Universe’s history, like stars, galaxies, and clusters of galaxies. In fact, without dark matter, the anisotropies are far too small for just matter alone to have formed structure because matter interacts with light and was affected by the radiation pressure, and enough time hasn’t passed for matter alone to form the structure we see today. Hence, dark matter is necessary for structure formation. 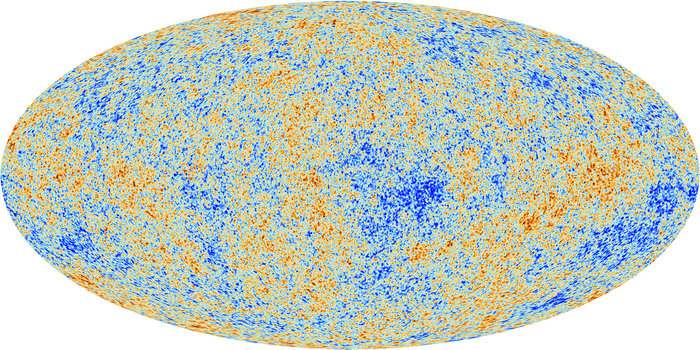 The Cosmic Microwave Background, as seen by the Planck Satellite.
Credit: ESA and the Planck Collaboration.

Keep in mind, although there are little anisotropies, the CMB is extremely homogeneous on large scales—homogeneous to 1 part in 100,000, in fact. The homogeneity is likely a result of inflation in the early Universe (you can read all about it in a post I wrote on it, here). But the small fluctuations stuck, and grew as the Universe did, where dark matter accumulated and provided the seeds for formation of the structure we see today.

1The CMB also very closely coincides with what we call our particle horizon (the particle horizon is a bit farther back in time) which is as far back as we can possibly see into the Universe even if the CMB wasn’t opaque; read my previous post on inflation to learn more about this, here.

2This may not have always been the case: if primordial black holes, a hypothetical form of dark matter, exist, then they would’ve formed during this time. If the radiation pressure wasn’t sufficient to push back the matter that was grouping into the density fluctuations, then the matter could collapse and form black holes. We’ve not found any of these yet.

So now we know some of the ways dark matter reveals itself to us. Another thing we do now is use simulations to help us figure out stuff about the Universe, putting in all the relevant physics so that we can watch the Universe unfold at far quicker timescales (because we’re humans, and we simply don’t have 13.8 billion years to watch the Universe grow). When we simulate galaxies, and galaxy clusters, with just normal matter (including stars, gas, even MACHOs and all the tables and chairs and textbooks that a cluster can possibly contain), we find that these galaxies and galaxy clusters just fly apart. However, when we throw in dark matter, the galaxies and clusters of galaxies hold together and come out in one piece. So dark matter is required to ensure structure formation holds. …unless our understanding of gravity is fundamentally wrong.

To be continued: Learn about some viable possibilities for dark matter, with a focus on the type I’m researching called Self-Interacting Dark Matter, in an upcoming post!

8 thoughts on “Dark Matter, Part 1: How we know it exists”

I'm a PhD cosmology student at UC Irvine. I pick apart the Universe to figure out how it works and what it's made of. I enjoy communicating science with the world in my spare time. View all posts by Sophia Gad-Nasr